On this date we received an impressive document about the deployment of Willem Adrianus Torn who died 1944 and was found in 1989 in Australia. One of the many brave men of the 18th Sqn NEI. A story like so many. A document as a reminder and memory of Willem Adrianus Torn and especially for those who gave their lives for our freedom, Queen and Fatherland. Lest we forget, in commemoration of 75 years of liberation!

Over the past two years, we have endeavored to spread the history of the 18th sqn worldwide by supporting the further development of the documentary about the Liberators and the history of the 18th Sqn NEI. As a Foundation, we were dependent on subsidies and donations to generate financial resources to support the production of the desired documentary. We have received a large number of private donations to the documentary, but the requested necessary subsidies from various funds and the Ministry of Health, Welfare and Sport have unfortunately not yielded anything.

As a foundation, we do not meet 2 important conditions to qualify for a subsidy, namely that it must be linked to historiography in Europe / The Netherlands (unfortunately the former Dutch East Indies and Australia are not included) and the target group of our foundation is the “children of veterans” and thus does not meet the conditions of foundations and agencies representing “veterans”.

The high expectations and enthusiasm of the Royal Netherlands Air Force (KLu) were quickly tempered and ultimately yielded nothing.

That is why the Foundation has decided not to pay any further attention to obtaining donations and applying for subsidies for the creation of the desired documentary.

This is not to say that we are giving up, but since we are financially dependent on third parties to produce a documentary like the Foundation, we want to put this initiative on hold for now, perhaps for better times.

We will remain active for our Children of the 18th Sqn.! We will undertake various activities where we as a Foundation have (financial) control. Such as organizing the reunions, giving lectures, our identity we represent to others such as the reunion of the KNIL, we are one of the affiliated organizations of the National Remembrance Foundation August 15, 1945. As well as maintaining the relationships by sea. And we would like to work on small-scale exhibitions.

For this, the following request: donations for the documentary are stopped, you no longer need to donate for the realization for a documentary.

Remembering the many fathers who fought during WW II and shortly afterwards in the 18th squadron NEI for our Freedom, our Queen and our Nation.

The Board of the 18th Squadron Foundation wishes everyone a Merry Christmas and the best wishes for 2021; we wish the new year may provide new opportunities,  stay healthy so hopefully we may meet each other again.

Presentation Probus Bilthoven The Netherlands This day we were warmly welcomed in Bilthoven by Probus Bilthoven for giving a presentation about the 18th Sqn NEI, The Forgotten Liberators and a forgotten and unknown story. Thanks in part to Ankie van der Wind, we were allowed to tell "the story and its history", present our ambitions and explain our mission. A very special day with warm memories of a great group of enthusiastic listeners.

Probus Netherlands wants to promote togetherness and friendship of totally or almost entirely post-active persons of 65 years and older. The members have fulfilled a socially responsible position and value the regular meeting of each other. Everyone from a personal, intellectual and social background.

We were present at the Veterans ML-KNIL reunion in Bronbeek Arnhem. A very special day and lots of contacts!

KLu Veterans reunion 2019 in Eindhoven. Today we were at the KLu veterans reunion for the second time at Eindhoven Air Base. After a successful year in 2018, we were again very welcome to be present. This time we really asked for attention; we got a stage! After we introduced ourselves to the public and told our mission as a foundation, the trailer for the documentary to be made was shown.

With fantastic cooperation from André Eilander from Orpheus Media the audience was caught by the challenge we face; the realization of an impressive documentary about the 18th Sqn NEI and the accompanying history, in which Freedom is central "The Forgotten Liberators"

With this impressive introduction we hope to open the eyes of many veterans and stakeholders. Our freedom, 75 years later. One would naturally say. But the freedom fighters in the Dutch East Indies should not be forgotten! After all, they also fought for our freedom, for Queen and Homeland.

Looking back. On August 14 this year, at the invitation of the National Remembrance Foundation, August 15, 1945, the board of our Foundation was present at the Binnenhof 1 for a special commemorative meeting for the 60 for affiliated organizations. The Children of the 18th sqn foundation. is one of the youngest member organizations! Our second year: 2019. The representatives, with the chairmen of the First and Second Chamber, were invited to attend the

This is the story of Anneke van Loggem-Kouwenhoven. She reminisces about her childhood in the then Dutch East Indies, her stays in Japanese camps there, and the years after that until her return in 1948 to a Netherlands that is virtually unknown to her. Anneke draws from her secret camp diary that she only dares to see for the first time at the end of her life. She has never before published camp drawings of her mother in her story, as well as photographs and excerpts from the correspondence with her later husband and the KNIL captain at the KNIL, Ros van Loggem. In 1945 navigator Ros and pilot Guus Hagers find their loved ones Anneke and Lienke in a spectacular way by flying over the Japanese camps with a Mitchell B-25 bomber and calling out their names. The story of the pilot is published in Een unwavering love by author couple Charles den Tex and Anneloes Timmerije. After Anneke accidentally encounters this publication and also recognizes part of her film scenario worthy of love history, Anneke tells her mirror story in a full-page article in the Volkskrant and in a broadcast by De Wereld Draait Door. Thanks to the many positive reactions, Anneke feels supported to publicly share her personal life story in "Toen ... Vroeger ..." In 2017, Anneke dies at the age of 94, shortly after she has entrusted her memories of the paper and her story has been filmed by documentary maker André Eilander.

Today the exhibition started about the life of Guus Hagers, pilot of the 18th Sqn..

His life story, his experiences, the liberation of his Lienke. It comes all together at  the Military Tradition Museum in the town of  Driebergen near Utrecht, The netherlands.

The opening was made in the presence of about 30 invited guests, of which also family van Lienke, a niece of Nienke as well as a cousin of Lienke, Jaap Weeda, but also the Children Foundation of the 18th Sqn NEI was present.

Guus Hagers, a man, a Hero and a top pilot! A special story!

Partly thanks to the excellent efforts of Goos Hageman and Max van Kleef, but also the great cooperation of the Military Tradition Museum, this exhibition has come about. 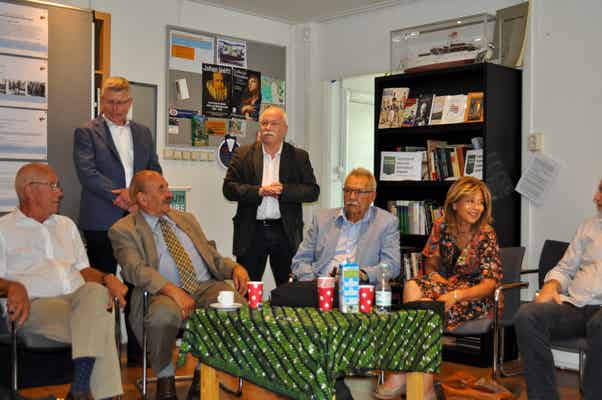 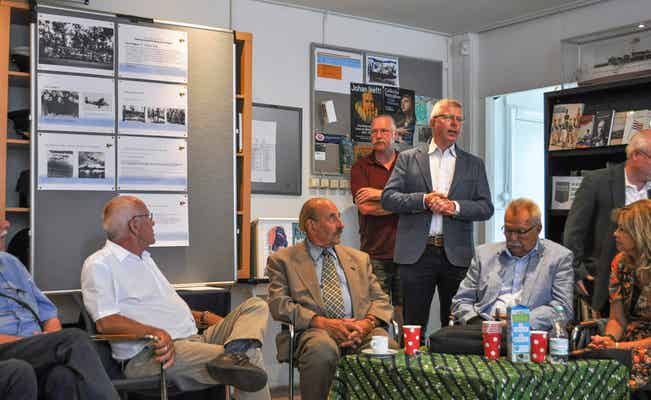 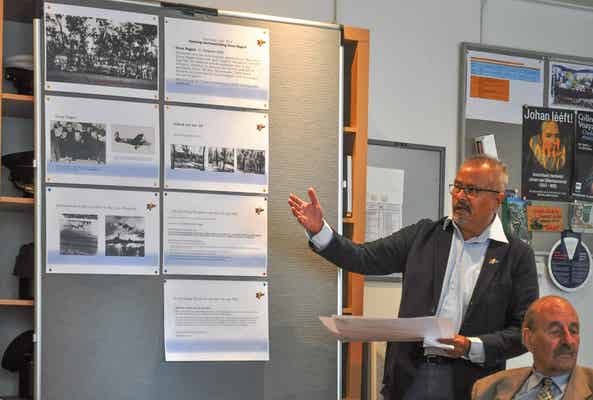 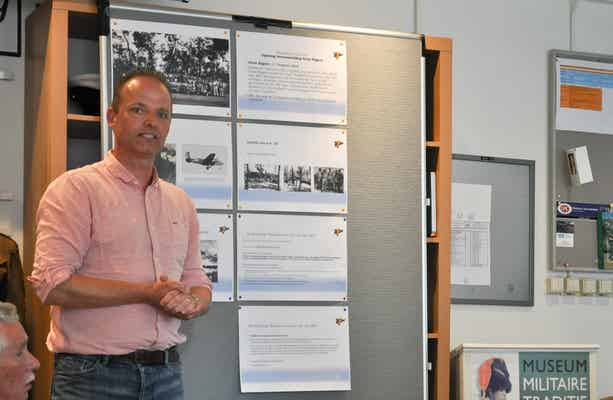 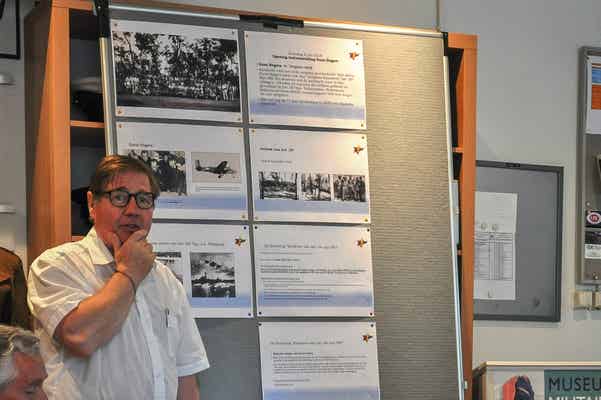 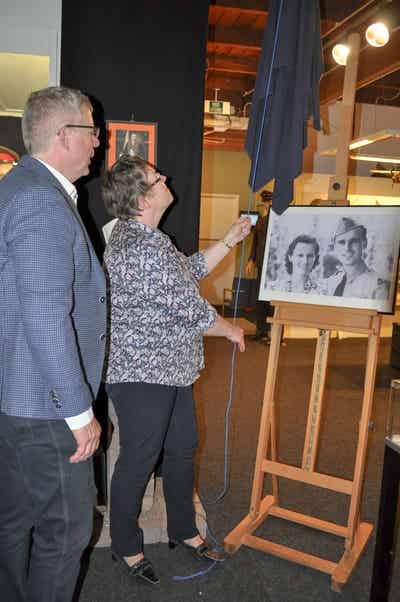 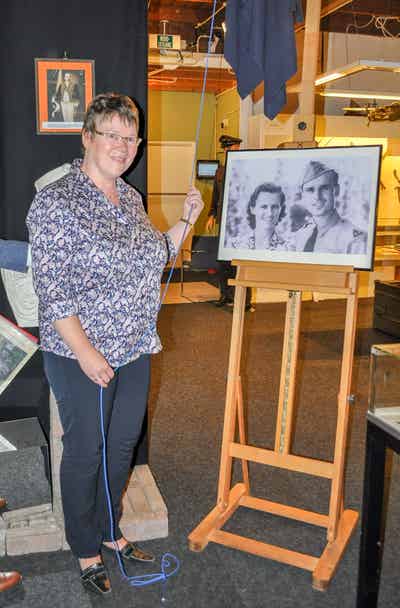 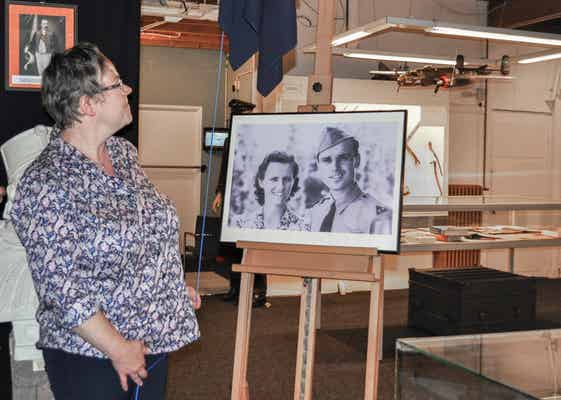 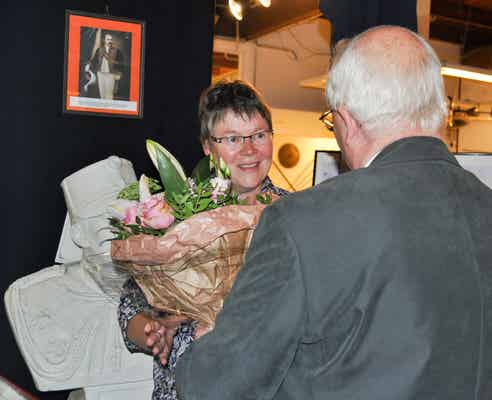 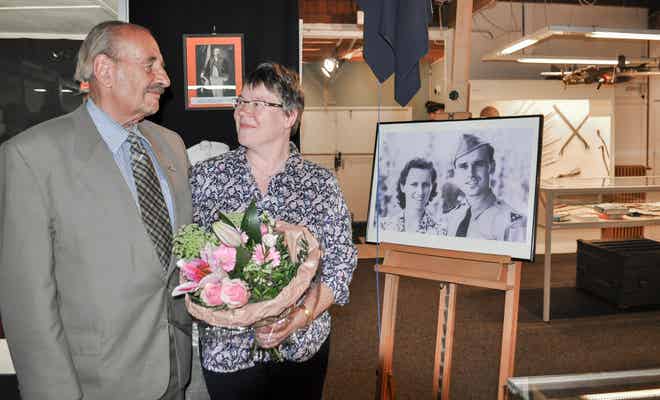 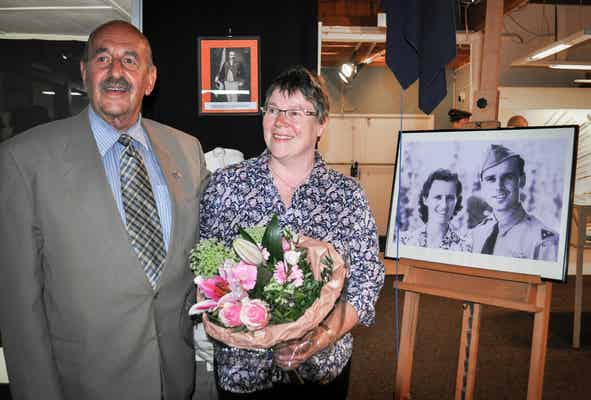 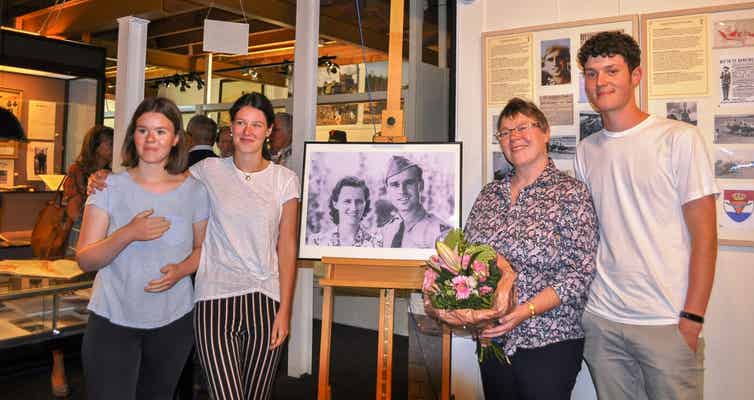 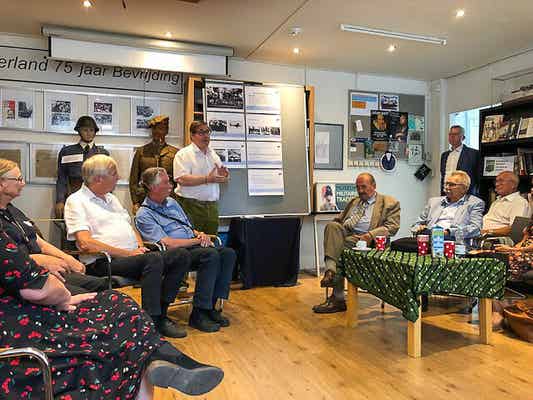 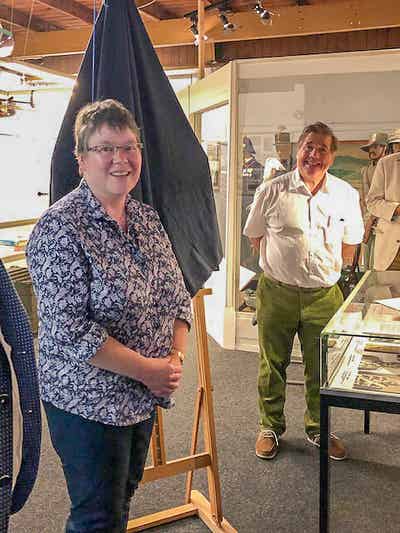 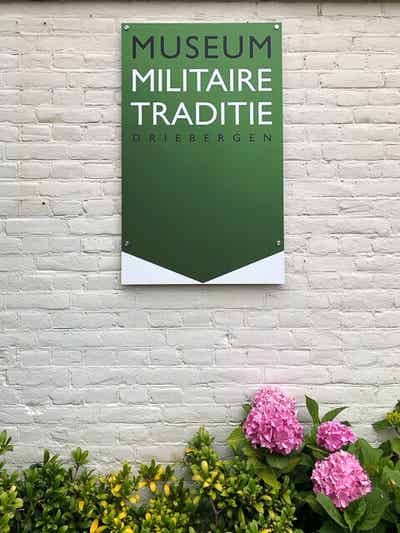 We were present! And how! Also thanks to the collaboration with Elmer Mesman. These were two excellent days where we could show and tell 'our story'. We were a stand with content. Not only selling books, pins and the like, but we were one of the few who could also tell something about the content. About the history, about the forgotten history! And without history no future! 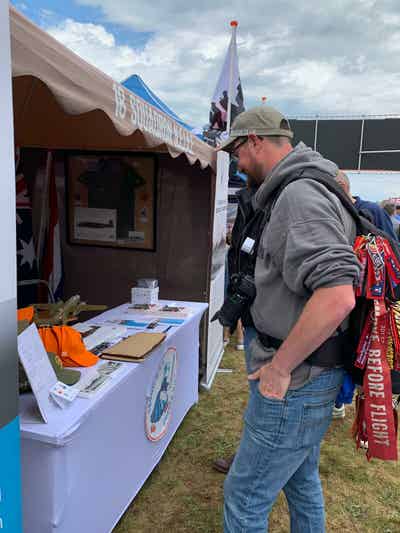 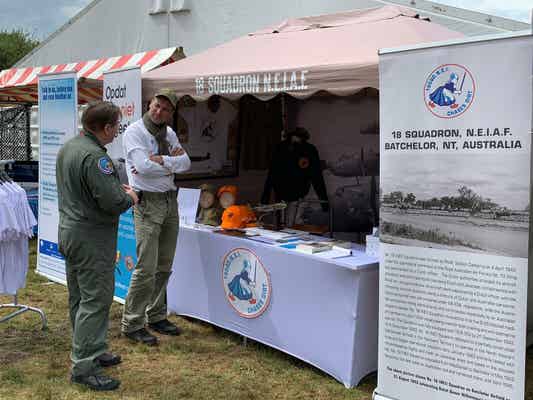 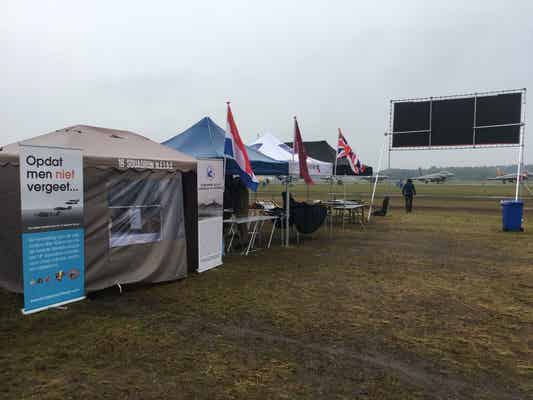 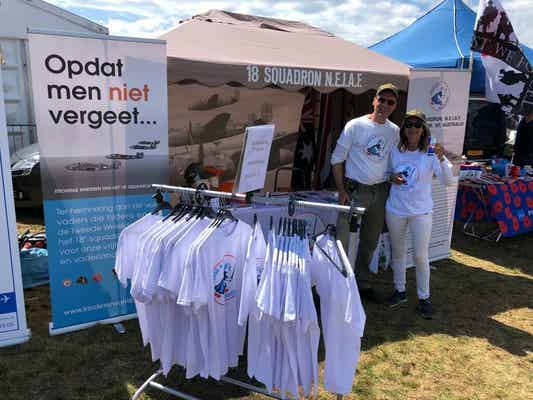 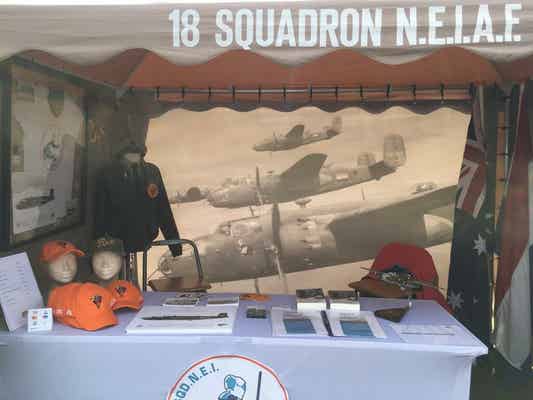 Saturday, September 8, it was so far. The reunion of the Children of the 18th sqn NEI 2018. A great success, the attendance was again overwhelming, also many new faces !. This time held in the mess in 1940 at the Aviodrome at Lelystad Airport. A special pleasant, cozy and atmospheric environment. Almost everyone had included his or her (photo) books, stories and possible attributes. Soon the stories came loose.

There were guests from Canada and Australia, among others! Great speeches by John Deknatel and Peter Smythe, but also by Karen Pelder and Jan Hulscher to inform us about the research that is currently going on in the period 1945-1950.

Also a moment of silence, a moment of remembering and with thoughts of our fathers, grandfathers, uncles of the 18th sqn. who fought for our freedom! So that people will not forget!

By the Aviodrome well-groomed service, the 'blue bite' with drinks and appetizers, by the fantastic contribution of Elmer Mesman, by the efforts of all who contributed to the success of this day and as a bouncer a great poem by Jeroen Ward with a summary of this day presented in rhyme, we may conclude that this day may be named as very successful!

The photos are on the site! With thanks to our photographers Johan Lemmers and Robert Berger.

Speeches (bilingual) and documents come later. We are working hard on that now, for that we have to be patient!